I'm a bit hesitant when it comes to posting outfits.  I love getting dressed up (though Andy will tell you it usually takes me longer than it should), but I don't particularly love being photographed (Andy can tell you all about that, too).  But I thought it would be interesting to go through my last year of outfit posts and pick some favorites.  I would say my style this year was most influenced by Game of Thrones, Miss Marple, and young girls in the 1930s (as portrayed in films such as Cracks and Hugo).  Maybe with a touch of Little Edie Beale. 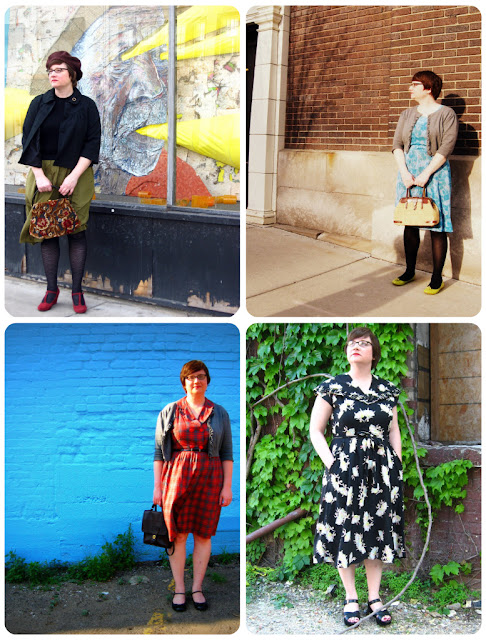 L-R, top to bottom
1) March 2011. I picked this mainly because I'm wearing a beret and I like it.  I hardly ever wear hats.  Also carrying my favorite bag and wearing my favorite tights here.
2) April 2011.  This is a great 1950s voile dress that is really flattering.  I also like the color combo of the cyan blue dress and chartreuse shoes.  The colors in this outfit were actually inspired by a street style photo somewhere.
3) June 2011.  Love this 1950s red and gray plaid dress!
4) June 2011.  1950s Swirl dress with a ballerina print.  Not the kind of thing I'd normally wear (I'm the rare girl who never cared about ballet or horses), but it's a Swirl, has a great collar, and is black.
L-R

1. 1950s navy blue voile dress, 1950s embellished shrug, favorite purse, favorite silver T-straps.
2. I'd been wanting a black eyelet dress for ages and finally found this 1960s one that fit me!  And I just found another in my size from the 1950s with a full skirt and rhinestone buttons--even better.
3. I've had the 1970s dress I'm wearing here since the early 1990s.  It has the most amazing print.  I'm also wearing my new fur collar, and a new-to-me 1970s fitted tweed jacket.
xo
K
Posted by Karen/Small Earth Vintage at 10:20 AM