Dear Internet, and most especially, Tumblr--
I love you so much!  You let me keep a scrapbook of all my favorite things, and I don't have to mess with scissors, glue, or scrapbooking stores.
Seriously, I remain a hardcore fan of Tumblr since I signed up for an account a few months ago, and my Tumblr blog, alwaysalwaysalwaysthesea, has become my online repository for sources of inspiration and obsession.  I've made a couple collages of images from my July Tumblr-ing--click them to make the images nice and big. 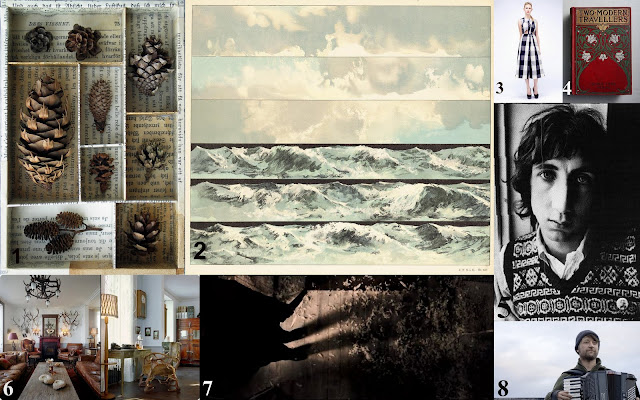 1. pine cone collage (via Cori Kindred's Flickr stream)
2. Dutch paper theater scenery.  Old paper puppet theaters are really cool and were beautifully illustrated. (via 50 Watts)
3. gingham check dress from Roksanda Ilincic's Resort 2012 collection. (via style.com)
4. beautiful old book cover (via HoskingIndustries Flickr stream)
5. beautiful young Pete Townshend, in a fair isle sweater vest (via meninsweaters on Tumblr)
6. single malt scotch + a lodge on Jura, an island in the Scottish Hebrides = my dream vacation. (via IsleOfJura.com)
7. creepy as all heck, but beautifully filmed and with a stellar cast (David Morrissey, Sean Bean, Andrew Garfield, Maxine Peake) all decked out in 1970s finery.  Screenshot from the Red Riding Trilogy.  Will give you nightmares about Yorkshire policemen--who knew?
8. I do have a thing for Scotland and accordions.  King Creosote (a.k.a. Kenny Anderson) fills the bill.  His gorgeous new album with Jon Hopkins, "Diamond Mine," has been nominated for Britain's Mercury Prize and deserves to win.  Buy it!  (image via Dear Scotland) 1. Richard Armitage.  It's been quite a week for us Armitage fans.  He appeared in his first major Hollywood film, Captain America, and an awesome photo of him as Thorin Oakenshield in next year's Hobbit film was released.  Plus, he's looking quite sexy and fierce in this Project magazine shoot.  (via RichardArmitageNet.com)
2. Speaking of fierce.  This is Danish actor Mads Mikkelson.  He's been in a number of films, but the one I know him from is After the Wedding.  (It's good; watch it on Netflix.)  I really like these photos.  (via brilliantinemortality on Tumblr)
3. photo by Matthew Turley of an A frame shed in Norway. (via mpdrolet on Tumblr, who consistently blogs the most interesting photography)
4. amazing lace halo/headdress (via suz1212's Flickr stream)
5. more fierceness, this time Arya Stark, my favorite character in HBO's Game of Thrones.  Have you seen it?  You really should.  I may re-watch the whole thing again--I can't wait for the next season.  (via HBO.com)
6. an 1839 friendship album with locks of hair sewn into the pages and color drawings of flowers. (via summer turban on Tumblr)
xo
K
Posted by Karen/Small Earth Vintage at 10:31 AM