i spy: dreamy skies, French film, and pre-punk fashion from the 1920s

August was half enjoying the dreamy end of summer, and half looking forward the bustle and fun of autumn.  Andy and I went on a little Truffaut kick, watching The 400 Blows and Stolen Kisses.  And we did a little trip prep by reacquainting ourselves with Mozart via Amadeus--what fun it was to watch that film again (the last time I saw it was probably its release 30 years ago)!

I hope your August was--and your September will be--beautiful and inspiring!  (More of what you see here can be found on my Tumblr and Pinterest accounts.) 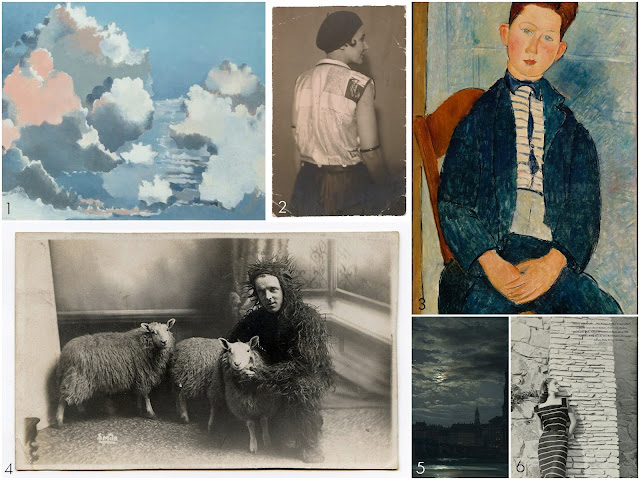 1 / Cloudscape by Paul Nash, 1939 / via
2 / photograph of Kate Steinitz in a newspaper print blouse at the Cinnabar Festival, Hannover, Germany, 1928, by Jos. Link / Archives of American Art
3 / Boy in a Striped Sweater by Amedeo Modigliani, 1918 / Metropolitan Museum of Art
4 / the sheep man / unexpectedtales on Flickr
5 / View of Dresden by Moonlight by Johan Christian Dahl, 1839 / Wikipedia
6 / Pat Premo striped sundress in the July 1946 issue of The Californian / archive.org 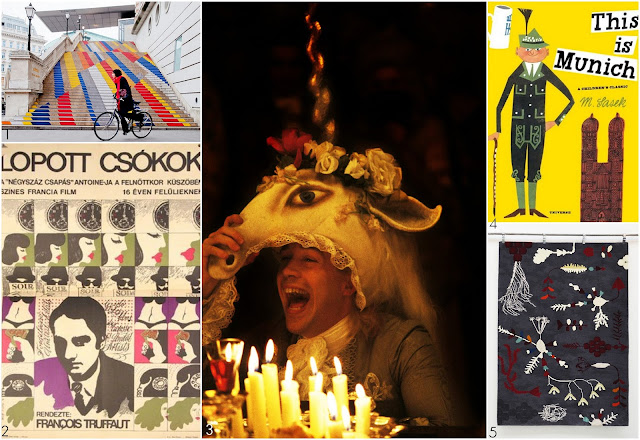 1 / Vienna on Foot  / ZienPhotography on Flickr
2 / Hungarian poster for François Truffaut's Baisers volés (Stolen Kisses) / via
3 / Tom Hulce as Wolfgang Amadeus Mozart in Amadeus / via
4 / This is Munich, written and illustrated by M. Sasek, 1969 / via
5 / Honduras rug, by Lotta / via

Posted by Karen/Small Earth Vintage at 9:52 AM