Peggy Olson: "I look at you and I think, I want what he has."

Peggy is not the only one on Mad Men who wants what Don has.  However, creatively speaking, she is the only one to come close to getting it.  I think she's the only character to really understand Don.  And it's difficult to talk about Peggy without talking about Don.  She is, in many ways, a mirror image of him.

Peggy wants more than a husband and children.  Scenes with her mother and sister in Brooklyn are claustrophobic.  "Those people in Manhattan? They are better than us. Because they want things they haven’t seen."  Peggy wants something different, and she ends up able to have it because it turns out, she thinks just like a great ad man does.  Like Don, she is able to put into words and ideas what it is people desire.  "I don't think anyone wants to be one of a hundred colors in a box."

And yet, despite her talent and hard work, Peggy must struggle against the entrenched sexism of the time.  Don may have been the one to promote her from secretary to copy writer, but he also is the brick wall she hits over and over again when she wants a raise or simple credit for her work.  "Well, aren't you lucky.  To have decisions," she tells Ted Chaough.  Peggy may have risen far in the industry, but she still doesn't have the same options and freedom as the men around her do.

Peggy's personal life is full of struggle, too.  "I don't know why I pick the wrong boys."  From drunken mess Duck to irritating Abe to married Ted Chaough, Peggy's love life is as disastrous as Don's.  You'd think things could only improve after getting knocked up by Pete.  After that happened, Don gave Peggy some advice clearly based on his own experiences.  He tells her to "get out of here and move forward.  This never happened.  It will shock you how much this never happened."  Well, we know how well that worked for Don.  As Peggy later says, "Well, one day you’re there and then all of a sudden there’s less of you. And you wonder where that part went, if it’s living somewhere outside of you, and you keep thinking maybe you’ll get it back. And then you realize, it’s just gone."  This sounds like it could be the lament of every woman, doesn't it?

I'm not sure how Peggy will end up.  But I tend to fell the same way Don does.  I don't worry about her. 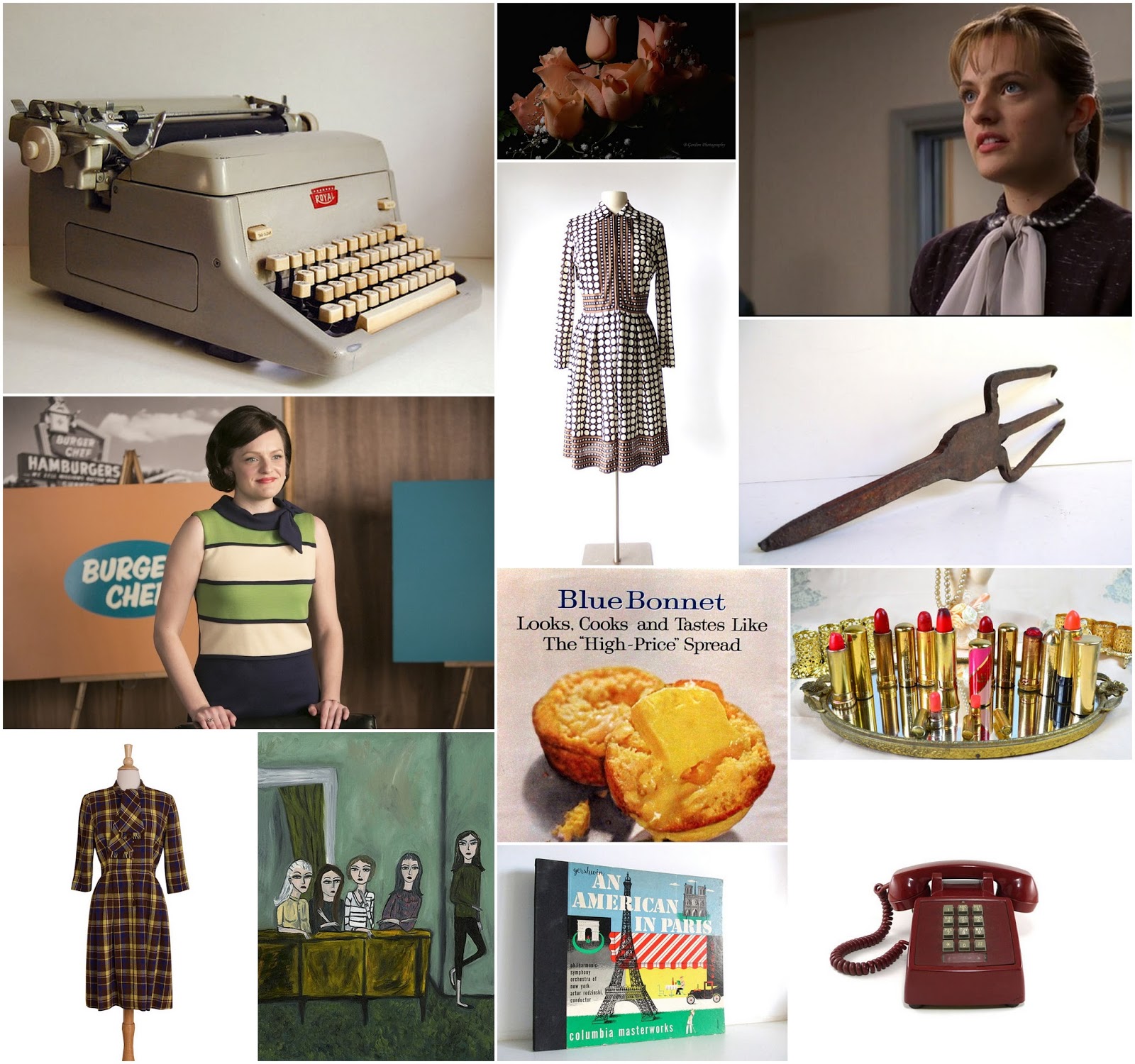 * 1961 Royal typewriter | CalloohCallay
* Peggy doesn't always behave well, and I like that about her character.  One of her most cringe-worthy moments: when she assumed that Shirley's Valentine's day roses were actually for her, from Ted. | fine art rose print from BJSGPhoto
* 1970s dot print dress | SmallEarthVintage
* That time Peggy stabbed Abe with a homemade spear because she thought he was an intruder. | antique eel spear from gazaboo
* "Here's your basket of kisses." | 1940s-1950s lipsticks from labelleboudoir
* I love Peggy and Stan, and I love how even when they were working at different agencies, they stayed connected via the phone . . . sometimes not even talking.  In the latest episode, after confessing to Stan about how she has a child out there somewhere, she asks Stan to stay on the phone with her while each are in their respective offices.  I don't care if they end up together romantically, or just as great friends:  these two will always be one of my favorite Mad Men pairings. | red push button phone from reconstitutions
* I loved the moment in season 6 when they're brainstorming the properties of margarine, and Peggy contributes the fact that margarine was invented for Napoleon's campaigns, since it never spoiled.  Peggy may not have gone to college--as the headhunter in last week's episode reminds her when speaking of her prospects--but she knows stuff.  The margarine comes back in the final season when Peggy dismisses Paris as "the place where margarine was invented." | 1961 Blue Bonnet Margarine ad from SnowFireCandleCo
* Speaking of Paris . . . gosh, I hope Peggy gets there one day!  Peggy saves an account by setting an ad in Paris, and when she complains about the account being given back to Ginsberg, Don's mean and dismissive response helps seal the deal on her leaving the agency.  And we see Paris come up again this last season, when Peggy laments that's she's never taken an actual vacation, and she and her date decide to take off for Paris.  But Peggy can't find her passport, because, of course, it's at the office. | 1950s An American in Paris album from 4EnvisioningVintage
* "I'm Peggy Olson and I want to smoke some marijuana." | Beatnik girls in NYC, 1959 print by Vivienne Strauss from vivstrauss
* 1960s plaid wool dress | BigCitySmallTownVTG