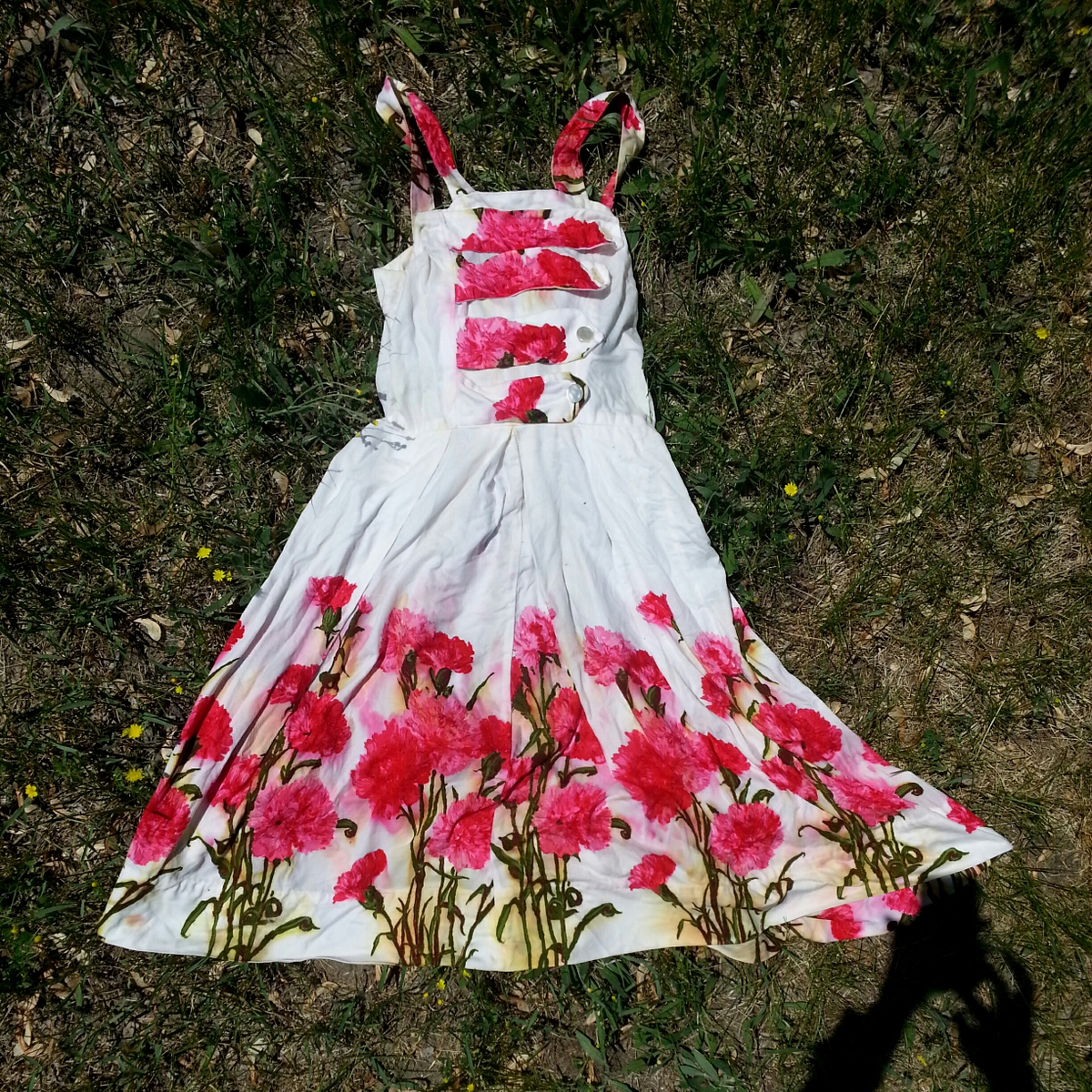 If you wear vintage clothing, you've no doubt experienced "the bleeder"--the beautiful dress or blouse that hits the water and bleeds dye that doesn't rinse out, but instead stains the rest of the garment.  I've experienced a few of these heartbreaks.  But I'd yet to find a way to save a garment that had bled in this manner.  I've had the above pretty dress since last summer.  It's a gorgeous 1950s printed piqué cotton and I was hesitant to deal with it because I knew it would be a bleeder.  I finally got brave two weeks ago and dipped it quickly in cold water and white vinegar.  (I have read on the internets conflicting information about vinegar helping to set dye.)  I set it out in the sun to dry, and as you can see from the photo above, it had bled pretty heavily.

This was one bleeder too many, and I decided to go to the experts--fellow vintage sellers and lovers on Instagram--and they did not let me down.  It was suggested that I put the dress back in cold water and change the water frequently.  I did this, and after some time (overnight) I saw what I thought was a lessening of the dye bleed.  Color catching sheets (Shout makes them; there may be other brands) were also suggested.  I put a pair of these in the water overnight two nights in a row.  The first night they had turned pretty pink; they were paler pink the second time.  They were certainly sucking up some dye, but whether they were removing the dye that had bled I couldn't be sure.  It was hard to tell with the dress soaking wet.

Finally, a couple people also suggested Synthrapol, a detergent with the specific purpose of removing excess dyes.  We couldn't find it in stores locally, so I ordered some (along with some Retayne, which sets dyes on cotton, to use after the Synthrapol) from Dharma Trading Co.  It took a week to arrive, and in the meantime, I kept the dress sitting in cold water which I changed once a day.  The Synthrapol directions have you wash the garment in hot water in the washing machine, which made me a bit nervous (I was fearful the hot water would cause the dye to run even more). . . but I needn't have been.  Look how the dress came out! 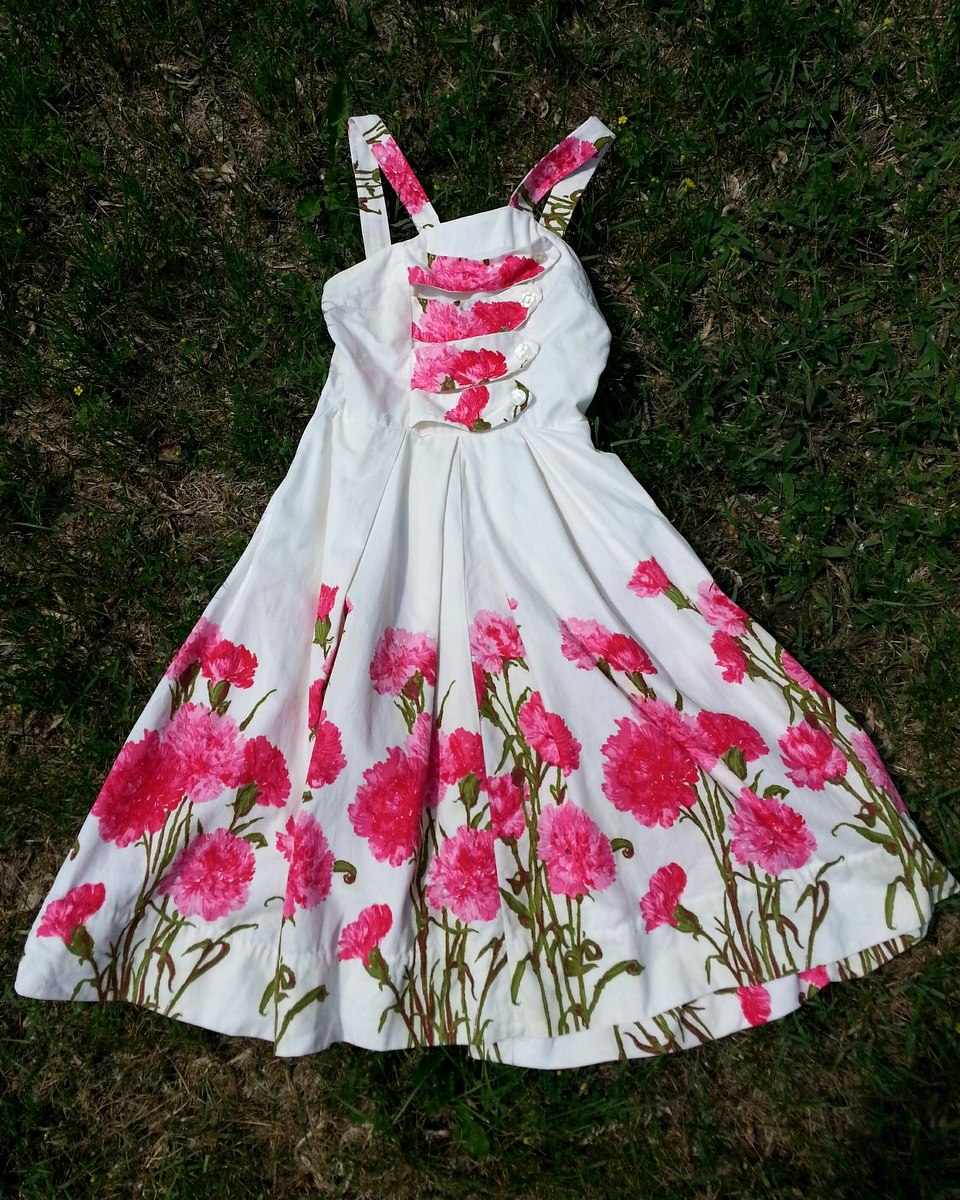 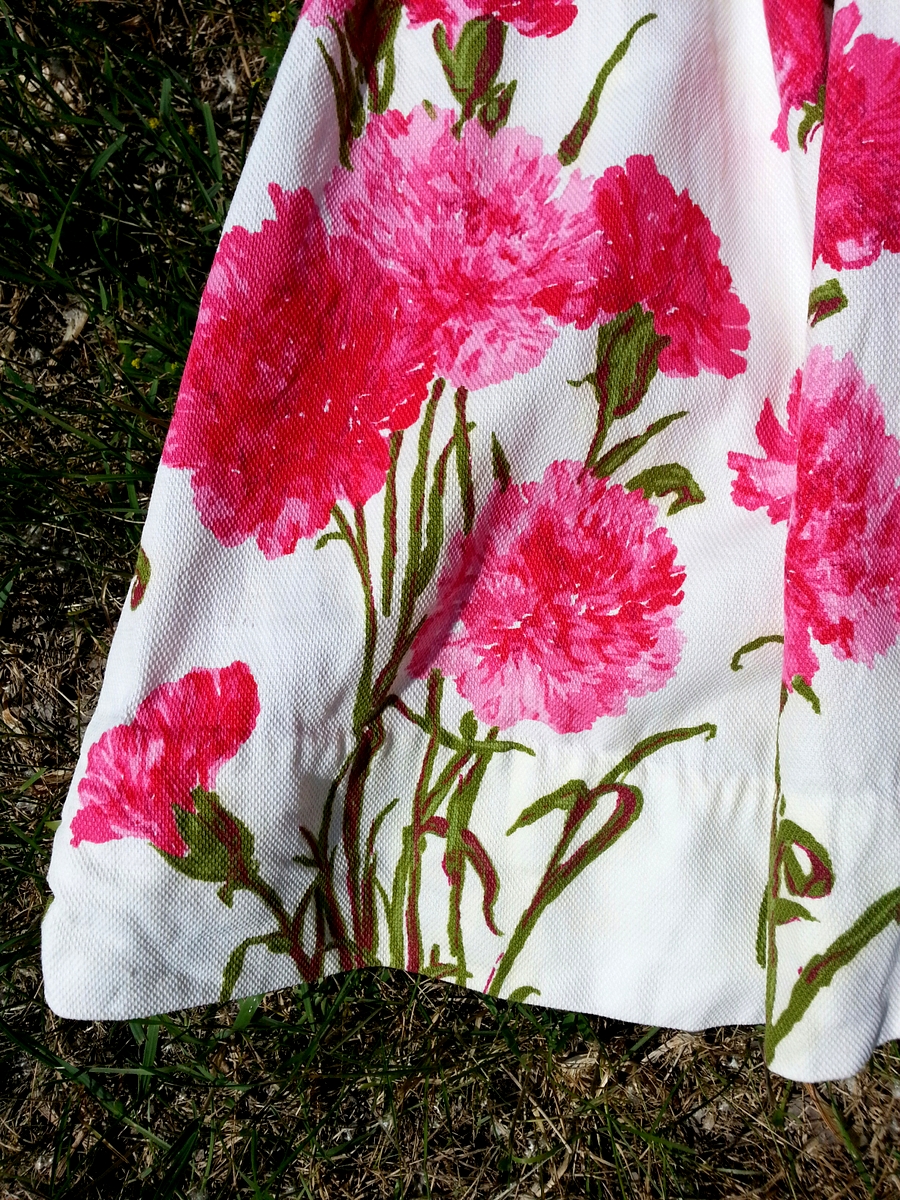 All the bleed is gone!  Even a couple minor stains on the dress were removed in this process.  It's not a miracle, but after having so many dye bleeds ruin garments, it feels a bit like one.  I'll probably be listing this lovely dress this week.

I have to thank the following bloggers, sellers and vintage lovers who shared their knowledge with me:  Pretty Little World Vintage, The Vintage Traveler, Two Old Beans, Jenny N Design, Love Charles, and Sabrosa Vintage.  This dress is saved because of you!

Posted by Karen/Small Earth Vintage at 9:38 AM