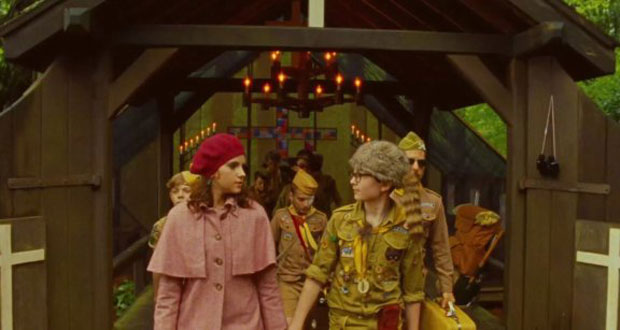 Of course I saw Moonrise Kingdom when it first came out.  And I loved it.  I'm a Wes Anderson fan.  His films are often dismissively put in the "quirky" category.  Yet each of his films seems to me like a carefully crafted object, every detail from the set design to the clothing to the music to the color of the light perfectly chosen.

I just watched Moonrise for a second time.  I didn't do a blog post after I first saw it.  Everybody else was.  And I couldn't blame them.  A film set on an idyllic New England island in the mid 1960s--and made by Wes Anderson--was going to be full of fantastic styling, both the sets and clothing.

I do often watch favorite films more than once, and it's the rare one that I love just as much or even more the second time.  Moonrise falls in this category.  It could very well be that part of this is the fact that Mr. Anderson and I are the same age (well I'm three months older), but his vision of childhood takes me right back into my own.  The importance of books and music, a fantasy life, the somewhat frightening specter of adulthood lurking around the corner...and yet the desire to grow up and be independent.  Wes Anderson captures this better than anybody.  Watching this film--Suzy looking out at the island with her binoculars, or sitting and reading her beloved books--reminded me so much of my own younger self, spending a day reading in a chair or playing dress up with old clothes.

I know what you really want to see are pictures.  Enjoy, and if you haven't seen Moonrise Kingdom yet, do.  Or go and watch it again.

The cast--which includes Bill Murray, Frances McDormand, Tilda Swinton, and Edward Norton--is amazing.  And the two newcomers playing young lovers Sam and Suzy are perfect.  Their (signature Anderson) deadpan delivery is spot on, and both young actors are charming as heck. 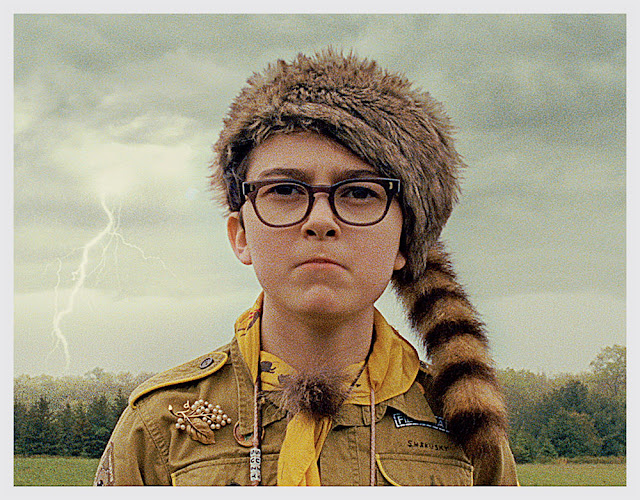 Jared Gilman as Sam wears a coonskin cap with his scouting outfit, excellent thick horn rimmed glasses, and a brooch that belonged to his deceased mother.  He's pretty tough and strong for a young fellow...well, he's had to be.  (As he tells Suzy when she says she wishes she could have been an orphan, as their lives--in books--seem more special: "I love you, but you don't know what you're talking about.")  Sam also has a  little corncob pipe that, along with those glasses, gives him an air of wise old adventurer. 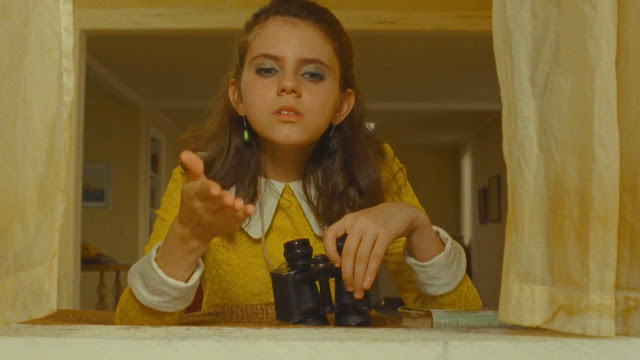 Kara Hayward as Suzy wears little mod dresses with contrasting white cuffs and collars, knee socks, and blue eyeshadow and heavy black eyeliner--she's girlish, but stretching toward womanhood.  She also wears a red beret with a pink Inverness coat (just like my other favorite movie character last year, Dr. King Schultz!).  Suzy is a pretty serious girl; her candy colored clothing helps show that despite her seeming maturity, she is still firmly planted in childhood.  And she has her own wisdom to impart, having watched her parents' marriage founder: "Being married.  Sometimes it seems sad to me.  It might be better just to go steady permanently." 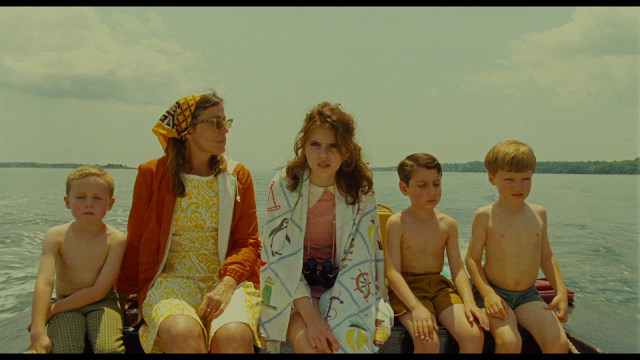 Frances McDormand, as Suzy's mother Laura, wears a succession of easy shift dresses in very Lilly Pulitzer-esque prints (perhaps they are Pulitzers) with chunky sweaters or a windbreaker, head scarf, and great shades.  She's a stylish, but not at all fussy, mom. 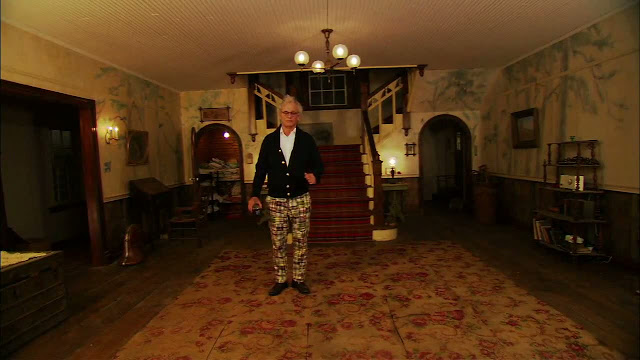 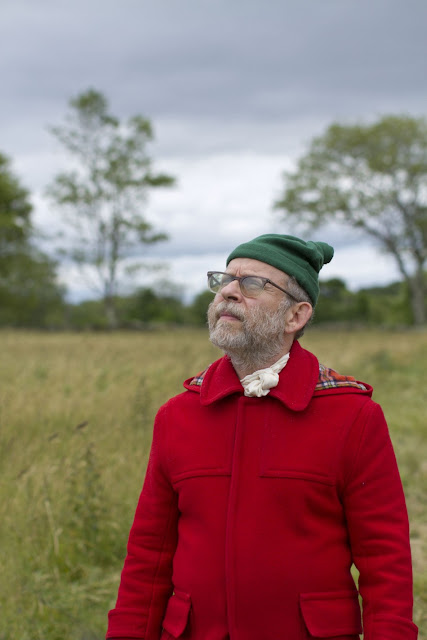 The sets and settings are just as fantastic as the clothing. 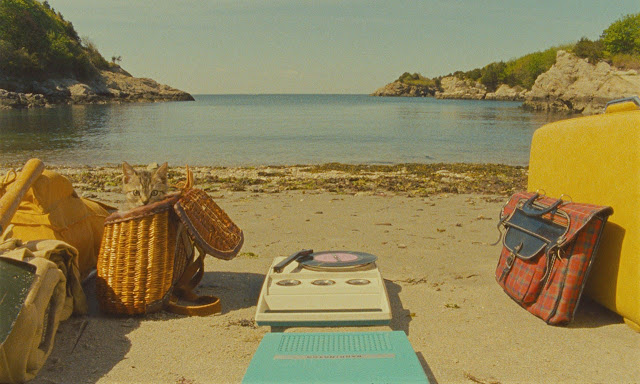 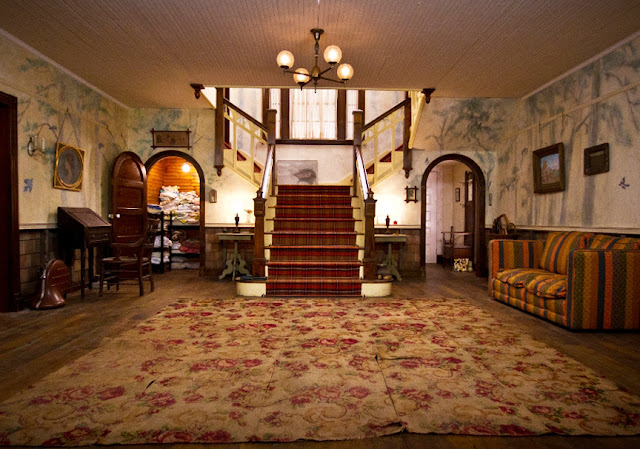 I love the plaid on the stairs, the rose pattern rug on the floor, the trees and birds painted on the walls, and the arched doorways.  The striped sofa.  Yeah, I love it all.  When can I move in? 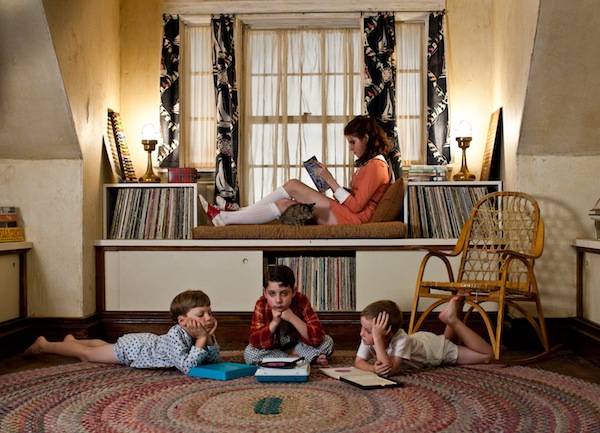 Suzy reading while her brothers play music.  More on the music later...but first: what does Suzy read? 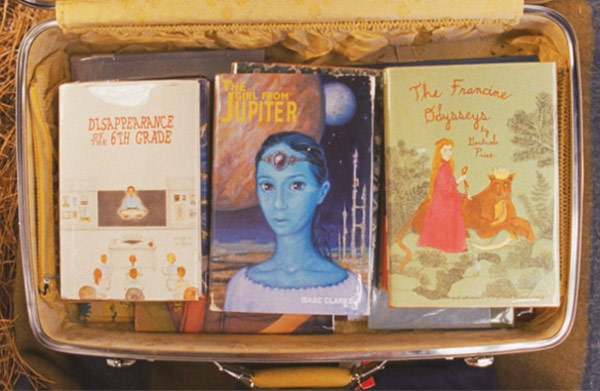 Even Suzy's books are rendered in great detail.  I love these faux book covers--particularly The Francine Odysseys. 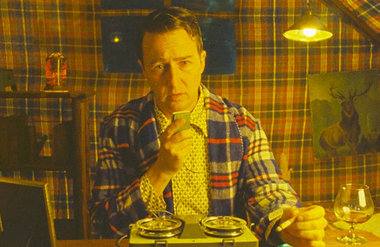 And check out plaid robed Ed Norton in his plaid tent.  (There's a touch of plaid in nearly every one of these shots.  I think Mr. Anderson likes plaid as much as I do!) 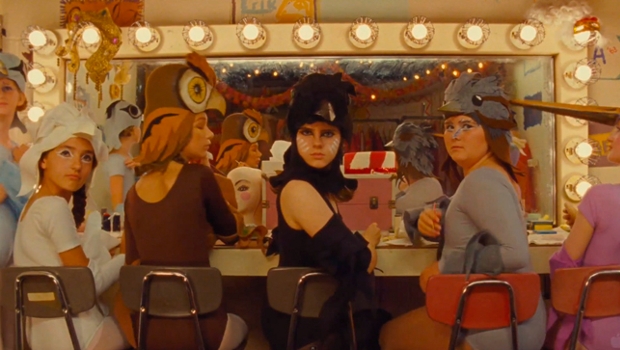 Last, but not least, the music in Moonrise Kingdom brings the whole film to another level.  Twangy Hank Williams songs underline lovelorn Duffy Sharp's (Bruce Willis) longing for Laura Bishop.  Suzy and Sam dance in their underwear on the beach to Francoise Hardy.  The Bishop children have a portable record player (an object of much conflict amongst them) on which they listen to Benjamin Britten's "The Young Person's Guide to the Orchestra."

And best of all?  The local church puts on a charming production of Britten's "Noye's Fludde," (fitting, as the movie is set during a massive storm) with the children dressed in animal costumes.  This music, and Britten's "Cuckoo" both figure prominently in the film.  I'd never listened to Britten before, but I fell completely and fully in love with the music.  It fits into the film so brilliantly.  Anderson said he and his brother were in a production of "Noye's Fludde" when they were young, and he says it very much influenced the film. 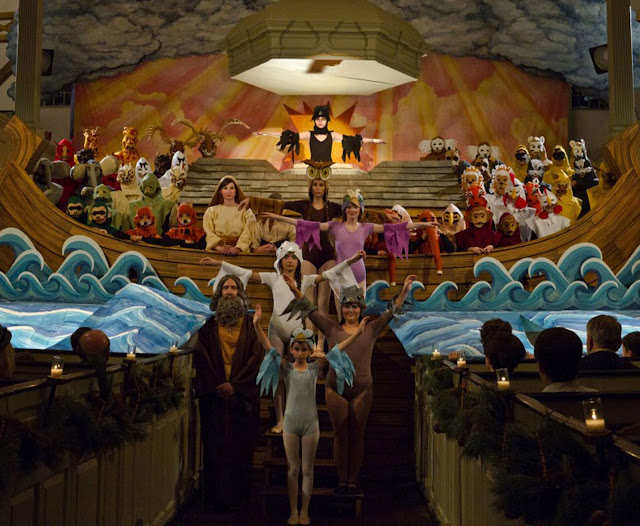 Just as I was shocked that Up could have beaten out Fantastic Mr. Fox at the Oscars, this year I couldn't believe that Moonrise Kingdom didn't get a best picture nomination (much less win).  I can't wait until Anderson's next film, The Grand Budapest Hotel.  And I'll also throw this wish out to the universe:  I would dearly love to see my favorite actor, Christoph Waltz, in a Wes Anderson film.

Posted by Karen/Small Earth Vintage at 9:48 AM