If you have worn or owned a vintage dress with a Carole King, Doris Dodson, or Minx Modes label in it, there's a possibility that at some point it passed through the hands of my grandmother, or one of my great aunts or uncles.  In the mid-1930s, the concept of junior fashions was born in St. Louis, Missouri (I was born there, too--but a bit later) making it, for a time, an unexpected hub of the fashion industry.  A 1940 article in the Palm Beach Daily News had this to say about St. Louis' burgeoning dress business: "The junior dress industry in St. Louis today employs more than 6,000 people and is growing as rapidly as trained help can be found for the machines.  The industry is entirely a local project.  There has been no outside capital to subsidize it.  Eighty percent of the designers employed are young girls fresh from the art school of Washington University [in St. Louis]." 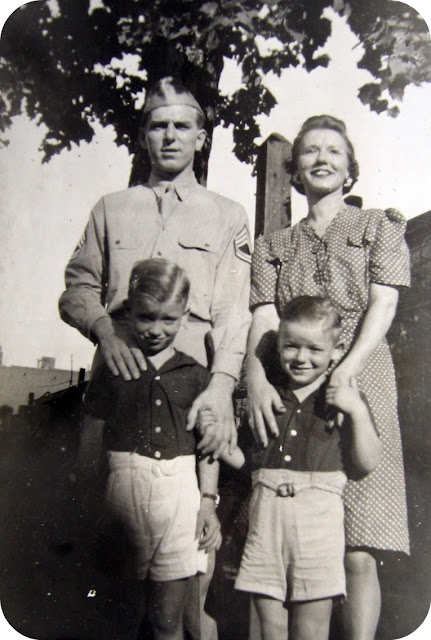 None of my relations designed the dresses--I don't think any went to art school, either--but my great aunt Margaret (seen in the above photo with her brother and nephews) worked as a bookkeeper for the Forest City Manufacturing Company, which owned several junior dress lines.
My mother remembers her Aunt Margaret saying she worked for "Grace Dozier Durocher's company." Grace was married to Leo "The Lip" Durocher who played baseball for the St. Louis Cardinals.  She was head designer for the Forest City Manufacturing Company, and later had her own line in the company, Carole King.  I didn't find a lot of information about Grace.  She and Leo Durocher were married for nine years and divorced in 1943.  I thought this divorce notice--from the October 11, 1943 Milestones section of Time magazine--was pretty funny: "She [Grace Dozier Durocher] said that The Lip was 'constantly of nagging disposition,' and asked no alimony." 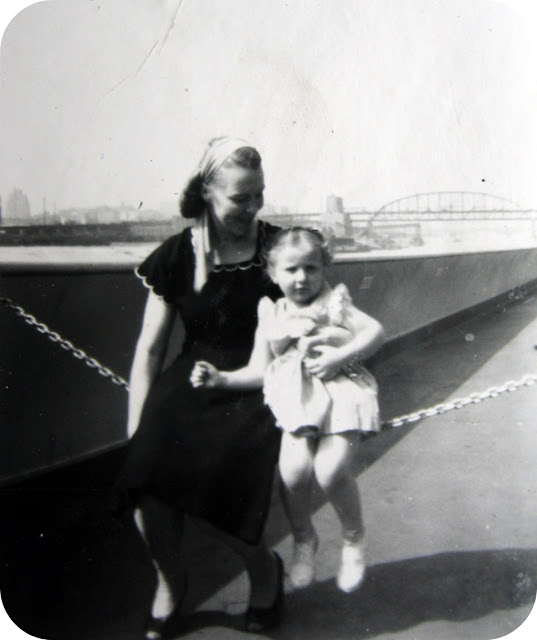 Here's Margaret with her niece, my mother.  (I'm loving the scalloped trim on Margaret's dress here.)  Margaret would bring home sample dresses from work for her three eldest nieces, one of whom was my mom.  The dresses would all be the same style/cut, but in different colors.  My mother would get the last pick, and usually ended up with the pink dress.  She was happy though.  No one in the family had a lot of money, and a brand new dress that wasn't a hand-me-down was something rare. 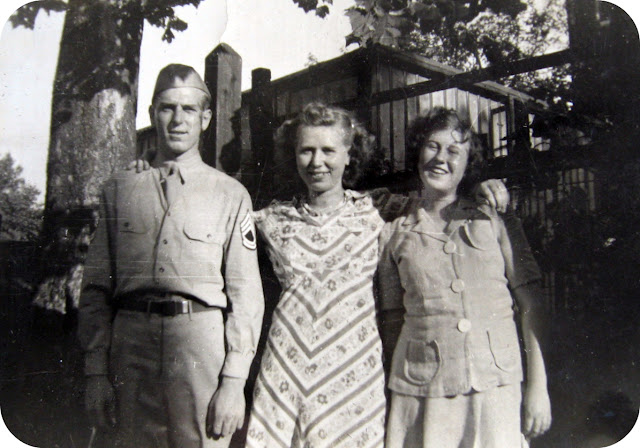 My grandmother Marian (in the center of the above photo) worked in the St. Louis dress industry, too, doing piecework sewing.  My mom told me that a couple of her uncles also worked in the industry as fabric cutters.
It's a little sad to think that this industry that employed many of my family members no longer exists in St. Louis--or even in this country, really.  My grandparents and my great aunts and uncles had very little money to spare, but they still managed to dress well--in clothing designed and manufactured right here in the US!  Amazing.
xo
K
Posted by Karen/Small Earth Vintage at 10:18 AM